Watch the video for Jenny Olivia Johnson's Reflect Reflect Respond Respond (Echo and Narcissus in Reverse), from the Wild Rumpus album Vestige. Jenny created the video herself with the EYESY video synthesizer to provide "a window into my synesthetic approach to composing music."

At I Care If You Listen: 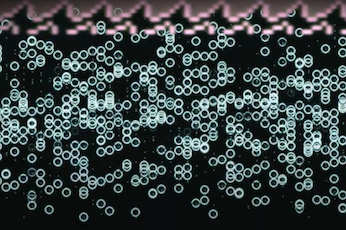 Dan VanHassel's arrangement of Radiohead's "Weird Fishes," from the Wild Rumpus album Vestige, was featured on an episode of John Schaefer's long-running New Sounds radio show devoted to "unusual covers". It appears alongside an "alt-classical garage band" doing Weezer's "The Sweater Song" and a Tuvan throat singer performing "When the Levee Breaks" by Led Zeppelin.

Vestige by Wild Rumpus Out Now!

Vestige, the long-awaited album by contemporary chamber ensemble Wild Rumpus, is finally released! Five years in the making, this eclectic mix of postminimalism and post-rock, featuring music by Per Bloland, Joshua Carro, Jenny Olivia Johnson, Dan VanHassel and Jen Wang, is the most ambitious record we've put out to date.

Pinna Records, founded in 2013 by producer Roger Rohrbach in San Francisco, California, releases new music by contemporary composers. We believe, with Kyle Gann, that "brand-new music can sometimes be joyous, clear, seductive, ingratiating, and/or simple, and still well-worth listening to and exploring."

The pinna is the visible part of the ear. It acts as a funnel, amplifying and directing sound to the auditory canal. Like a fingerprint, it is unique to the individual; similarly, our ears, rather than any specific agenda, guide our decisions about what to record and release.

Sign up to receive our newsletter, sent just a few times a year. We'll let you know about new releases, and keep you up to date with the doings of our composers and performers.